Today, we continue to guide you thru electronic music scene of Belgrade. The scene itself is a small one, but its rich and diverse when it comes to music genres and DJ collectives. We mentioned in our previous article which are the best clubs in Belgrade focused on electronic music. Now, we move to some serious names in our local scene.

Marko Nastic, is globally recognised by many as one of the Top South Eastern Europe artist as producer & DJ performer. Marko and friends accomplished and built one of the most vibrant club scenes in Balkan, the one that inspired writers of Mixmag, The Face, DJ and NME to write about.
In carrier long almost 20 years Marko has done more than 200 releases including rmx and co productions. He is most famous for his high end 3 decks sets which gave him opportunity to tour globe many times and to be resident of Exit festival. Currently releasing on his label Sake &Vinyl Only and Ama.

For many years Dejan has been on the scene,started dj-ing at the age of just fifteen and rolling for around eighteen years now. After winning lots of prizes in 1997 and 1998 everything started to happen. As a part of the KneDeep family he played all the major events by now and also had the ex Yugoslavian region covered at the same time having every weekend full of new experiences. His music style is a mix of house and techno that has a flavor of a long and experienced career. The year 2011 was the year of the debut album release from this artist after more than 80 EP’s in his music life , Trust and the Purpose (Gillesku Records) sold out all vinyl copies just in 5 days and made a great success. New album “Just Keep Talking Girl” has just been released in August 2012 on Plastic city label and also got a huge feedback from the audience.

For the past 5 years Dejan is collaborating with Burn energy drink company and working as their music ambassador,also giving lectures on a regional level for Burn Audio Tool software and making it available to everyone.

Winner of Burn Studios Residency contest 2013, resident DJ at prestigious Ibiza club – Privilege, playing on Elrow parties on Ibiza and in Barcelona.
She is charismatic, very talented and attractive. She has been into music since 2005 and created a boom in recent few years, performing in the most prestigious European clubs and festivals. In a short time, she shared decks with a lot of important names in electronic world music scene such as Laurent Garnier, Luciano, Richie Hawtin, Umek, Dubfire, Marco Carola, Anja Schneider, Miss Kittin, Azzari & III, Beltek, Supernova, Claude VonStroke, Carlo Lio, Layo & Bushwacka, Silicone Soul and many others.
She spins catchy mix of deep house, tech house, minimal and techno, always with a precise technique and extreme elegance and brings freshness and incredible energy in a unique way.
Identical energy is felt in her production as well, and she proved her talent in May 2010, winning the first place among hundreds of applicants on Remix Contest “Stefano Noferini – Papi”. The remix was published on Deeperfect records.
From that moment she establishes cooperation with many influential record labels such as Bosphorus Underground Recordings, Italo biusiness, Freshin, Butane recordings, Lovable Fairy Tale, Killing Machine, No-Logic…

Promoter, Producer and a DJ from Belgrade. Resident of the techno cathedral Drugstore in Palilula. The guy who understands what contemporary techno is all about.

One of our favorite DJ collectives in Belgrade. Guys that never disappoint. Beyond House is a party serial & music collective from Belgrade-Serbia, specialist in pure underground dance music with depth and soul.

In case you are visiting Belgrade, we of caurse recommend our City Break apartments situated in the central districts and near many Belgrade clubs, 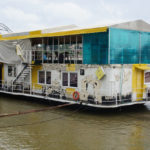