Hello, dear visitors. This week we’ve prepared ‘’City Break Apartments week guide’’ for you. So, let’s see what’s going on during this week and the forthcoming weeks.

PUPIN – FROM PHYSICAL TO SPIRITUAL REALITY

This spacious interactive exhibition dedicated to Mihajlo Pupin of Idvor, the most comprehensive representation of his life and work so far, is open to the public from 25 September 2015 to 30 June 2016 at the Historical Museum of Serbia at Trg Nikole Pašića 11.

The exhibition has been organized by the Historical Museum of Serbia under the auspices of the Ministry of Culture and Information of the Republic of Serbia, and supported by Telekom Serbia a.d. and Nelt Company.

In 2015, two anniversaries related to Pupin were marked – the centenary of his seven patents in the field of establishing telecommunications, and the eightieth anniversary of his death. Thus UNESCO declared 2015 the Year of Mihajlo Pupin.

The exhibition presents Pupin’s activities in the field of science and professorial work, his involvement in the establishment and improvement of the largest scientific institutions in the United States, his national and political contributions, charity work, patronage of the arts, and literary work, crowned with the prestigious Pulitzer Prize for his autobiographical, „From Immigrant to Inventor”.

Pupin’s large art legacy and his private library have been exhibited for the first time. Among the great number of documents unknown until now, are not only those from the FBI archives, but also from the Archives of Yugoslavia, the town of Pančevo, and the Regional Complex in Idvor. The National Museum in Belgrade, the Postal Museum, the „Svetozar Marković” University Library, the Library of the Serbian Patriarchate, the Intellectual Property Office, and the Museum of Vojvodina are among the numerous institutions which have lent their artifacts for the exhibition.

What makes this exhibition a unique museological experience for visitors is the application of the latest technologies. For example, interactive AR glasses are used for the first time in an museum exhibition at this museum. Numerous installations that can be activated by the presence of the visitors, introduce us with sound and picture to Pupin himself and his time.

Thanks to the authors, Aleksandra Ninković Tašić and Dr. Dušica Bojić, as well as to the team of pioneers in the use of AR technology, the exhibition represents in the best way the character and work of the great scientist, as well as the modern face and creative potential of present-day Serbia.

The exhibition is open until the end of 2016.

A new edition of Belgrade party serial Apgrade will feature global superstars Agoria from the prominent Cologne Kompakt label and Fabio Florido from Richie’s Minus label. The party will take place on the 16th of December in Magacin Depo, 3 Travnicka St. Tickets can be purchased in Gigstrix box office for 799 RSD.

Agoria (born Sébastien Devaud on January 16, 1976) is a French electronic music producer, composer and DJ. He has made four albums entitled “Blossom” (2003), “The Green Armchair” (2006), “Impermanence” (2011) and the soundtrack to the movie “Go Fast”. He has founded the record label InFiné and the Nuits Sonores Festival, both closely affiliated to the city of Lyon. He is also involved in contemporary art alongside the artist Philippe Parreno.

Sébastien Devaud, aka Agoria, entered the world of electronic dance music at an odd moment or so it seems. Unlike the first generation of techno producers, he seems to have been only too young to have been actively listening to the early 80s electronic pop by groups such as Depeche Mode or New Order. But unlike younger DJs and musicians, he’s been exposed to house and techno more or less since the onset of these genres.

Toni Erdmann will be featured on the program of the 22nd Auteur Film Festival. The film received the FIPRESCI Award at the 2016 Cannes Film Festival, which is awarded by the International Federation of Film Critics and is nominated for this year’s Best European Film.

The German film of the director Maren Ade, which depicts a relationship between a father and a daughter in an estranged world focused on success, through humor and fresh authenticity, has five nominations at the European Film Awards (for: European film, European director, European actress, European actor, European screenwriter). This is the third feature film of the thirty-nine-year-old director, Marin Ade, who is the representative of the new German wave. Also, it is the first German movie to have competed for Palme d’Or at the Cannes Film Festival after Wim Wenders’ Palermo Shooting in 2008.

In addition, Cristian Mungiu is nominated for European director and European screenwriter for the film Graduation. This movie is going to premiere on this year’s Festival on the 30th of November in the Belgrade Youth Center, at 7:30 pm.

The 22nd Auteur Film Festival is going to be held from the 25th of November to the 3rd December. And besides the above-mentioned, the main program of this year’s festival is going to feature nineteen more achievements, eleven of which are competing for Grand Prix Aleksandar Saša Petrović. Sweet Movie (1974) by Dušan Makavejev is going to be shown within the main program. “Auteur Film Festival has been representing and promoting a new, different, and authentic artistic expression since its foundation. In today’s world cinema, there are little of such free, brave, innovative, radical, socially critical, witty, philosophical, poetic and stylistic contemporary movies like Sweet Movie. The abolition of taboos, both narrative and visual, revelation of petty bourgeois, confusing and shocking that apathetic world, ridiculing the absurdity of totalitarianism, stupidity. That is the uncompromising poetic expression of Dušan Makavejev, or as the song of the band Partibrejkers says – Freedom or nothing else” – Srđan Golubović, the President of the Festival’s Council, points out.

Apart from the main program, the festival is going to include a bigger number of accompanying programs, which includes plays, educational programs and workshops.

The main hall of the festival will be the Belgrade Youth Center this year as well, while the festival is going to held in the hall of The Cultural Centre of Belgrade, the old and new building of the Museum of the Yugoslav Film Archive, in the cinema Fontana, UK Parobrod, Culture Center “Studentski Grad”, Art cinema (at the Kolarac Foundation and UK Palilula).

Ticket sale for the 22nd Auteur Film Festival begins as of today on all box offices, except for the programs which are shown at the old and new building of Museum of Yugoslav Film Archive. The tickets for this program are going to be on sale from Monday, the 14th of November.

All information about the program can be located on the festival website: www.faf.rs 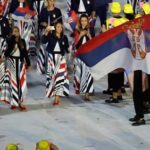 Serbia Among Best Dressed Nations At The Olympics In Rio

Euronews: Serbia Becomes The Leading Tourist Destination in The Balkans!