The Museum of Contemporary Art will be presenting a global artistic gem, the Austrian-Irish artist Gottfried Helnwein.  As a prelude to the exhibitions Gottfried Helnwein is to give  a talk on Wednesday 4th November in the ceremonial hall of University of Arts Belgrade in Kosancicev Venac.

The exhibition “Between Innocence and Evil” will be officially opened on Friday, November 6, at 18:30, in the Čolaković Legacy, and afterwards the gathering in the Salon of the MoCAB is planned to take place  at  8 PM

The speakers at the opening in the Čolaković Legacy: the Executive Director of the MoCAB Slobodan Nakarada, the Ambassador of Austria in Serbia Johannes Eigner, the Director of the Austrian Culture Forum Johannes Irschik, the artist Gottfried Helnwein, and the State Secretary of the Ministry of Culture and Information Saša Mirković.

On Saturday, November 7, at 13:00, a conversation with the artist Gottfried Helnwein will be organised (in English).

With the statement „My art is not the answer, it is more like a question“, Gottfried Helnwein has explained his work in the best possible way. This artist deals with the critique of the political situation, the crimes committed during the WWII, Nazism and Holocaust, bringing these together with the burning issues such as violence on children, violence by children and pedophilia.

The experience from the childhood spent in the post-Nazi Vienna, where nobody ever spoke about these issues seem to have frustrated  Helnwein, and so throughout his artistic career he has expressed his critique and revolt against atrocities of war and the politics of National Socialism. Instigated by the atmosphere of such an environment, he began studying the history of the phenomenon of cruelty and violence on the helpless and the innocent, mostly focusing around issues related to children. In his first water color piece of art he presented a wounded child blood splattered all over , by way of which he laid the foundation of his own visual iconography that is to remain his idiosyncratic style throughout his entire career as an artist, with realism and hyperrealism as his main stylistic features. By painting children in a rather unsettling way, but also in their unrivalled beauty, the artist presents them as symbols of innocence and the evil at the same time.

Apart from the child images taking up the central place in his paintings and the critical-historical subjects, the artist also did a series of photos―self-portraits in which  showing himself in the act of self-torture, referring to the vulnerable and the oppressed existence of contemporary individual. The selection of subjects and the forms of representation makes his works both disheartening and  inviting, at the same time, the spectator to feel the agony and evil Helnwein is making us painfully aware of, and to condemn them as the artist himself did.

The exhibition Gottfried Helnwein―Between Innocence and Evil showcases 33 artworks from different stages of the artist’s work. The exhibition is set in two spaces: the Gallery-Legacy of Milica Zorić and Rodoljub Čolaković, with 17 paintings (oil and acrilic on canvas) from different series (Epiphany, The Murmur of the Innocents, Disasters of War…), whereas in the other space, The Salon of the Museum, the audience is presented with 16 photos, mainly self-portraits, but also the photos from the series created in cooperation with Merilyn Menson.

Gottfried Helnwein (1948, Vienna, Austria) is an Austrian-Irish painter producing photos, installations and performances. Since he provokes rather visceral reactions on the part of the spectator, the fact that his exhibitions are amongst the most attended exhibitions of a contemporary artist comes as no surprise: his retrospective show in the Viennese Albertina museum organised at the end of 2013 drew in 250 000 visitors, which makes it the most sucessful exhibition in the entire history of this museum. Except in Albertina, he had one-man exhibitions in Museum of Modern Art in Strasbourg, Musée de l’Elysée in Lausanne, Russian State Museum in Sankt-Petersburg, California palace of the Legion of Honor in San Francisco, Rheinisches Landes museum in Bonn, as well as in many other internationally acclaimed  galleries and museums, and participated in numerous group exhibitions around the world. Also, Helnwein is appreciated for his stage designs, and theatre, ballet and opera costumes. Using his photo lens, he immortalised famous people from the world of show-business, art, film and music in his series of photos faces: Muhammad Ali, Charles Bukowski, William Burroughs, Arnold Schwarzenegger, Michael Jackson, Norman Mailer, Arno Breker, Leni Riefenstahl, and yet others, as well as the members of the bands Rammstein, The Rollingstones, etc. Currently, he is living and working in  Ireland and Los Angeles.

The exhibition is organised with the support of the Ministry of Culture and Information of the Republic of Serbia, the Embassy of Austria in Serbia, the Austrian Culture Forum, and Uniqa insurance company. 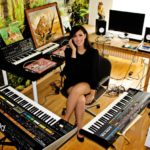